Andy Bogdan uses "string theory" to be sure the patio forms are straight.  17 OCT 2001

Patrick Wiggins pounds a stake to hold a portion of the patio forms in place.  17 OCT 2001  Ron Ford image

Patrick Wiggins and Bruce Grim show that no day's work is done before the cleanup is done.  17 OCT 2001  Ron Ford image

Bruce Grim watches to be sure the gravel is poured properly.  18 OCT 2001

Andy Bogdan and Bruce Grim run the scree board as Ron Ford, Hank Williams and Rob Robinson push the concrete into place.  22 OCT 2001

Andy Bogdan and Steve Fisher put the finishing touches on the first half of the patio pour.  22 OCT 2001

Siegfried Jachmann and Bruce Grim run the skree board as Boyd McNeil, Patrick Wiggins and Hank Williams man shovels and Larry Frisk runs for a shovel of his own .  25 OCT 2001  Ron Ford image

Hank Williams passes the tool to Patrick Wiggins as they etch a pressure relief gap in the concrete.  25 OCT 2001  Ron Ford image

Hank Williams uses a shovel to direct the first part of the final concrete pour.  25 OCT 2001

Bruce Grim and Siegfried Jachmann run the skree board as Larry Frisk and Boyd McNeil use shovels to keep the concrete in the right place.  25 OCT 2001

Ron Ford and Hank Williams watch as the last of the final pour is dumped near their waiting shovels.  25 OCT 2001

Bruce Grim and Siegfried Jachmann skree the final section of the patio.  25 OCT 2001

Ron Ford jokes around by using a tooth pick to do some final finishing work.  25 OCT 2001

Andy Bogdan and Ron Ford decide how to install the door locks and crash bars.  15 NOV 2001

Bruce Grim and Ken Harris look on as Andy Bogdan drills a hole of the door lock.  15 NOV 2001

The concrete caused the door frame to bend so the frame had to be "adjusted" with a grinder.  15 NOV 2001

Ken Harris switches the hinges after finding the crash bar had been installed on the wrong side...  15 NOV 2001

Bruce Grim drills a hole in the concrete floor for one of the thresholds.  17 NOV 2001

Patrick Wiggins attaches the final threshold (now all he needs is someone to carry across it).  17 NOV 2001

Ground heaving cracked a number of the slab sections necessitating their removal and reinstallation. 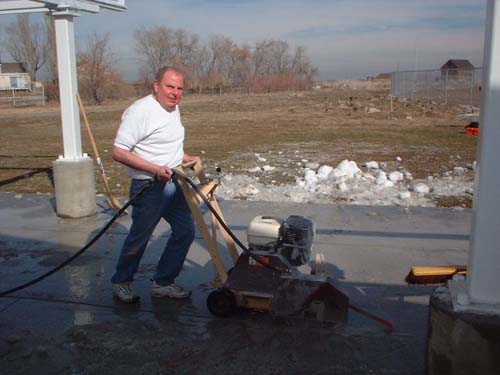 With the cuts finished Andy Bogdan and Roger Butz use pry bars to lift a section of concrete.  22 FEB 2002